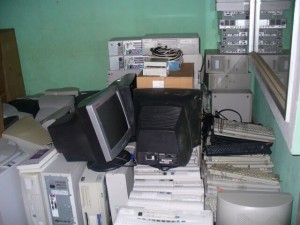 The container arrived with over $150,000 worth of equipment on Saturday, February 3 at approximately 3:30pm. We had two hours to unload it into a storage warehouse about 8 blocks from Hotel Sherwood. The bucket brigade assembly line worked furiously to get the container unloaded with the two-hour period allotted to us.

Physical therapy equipment – the wheelchairs, computers and other equipment was delivered to the P.T. Center.

Fire department equipment – over $25,000 worth of donated fire-fighting equipment including boots, jackets, helmets, air tanks, etc. was delivered to an extremely joyous group of fire fighters! We hope that the equipment will help save lives!

Senior care home for the poor – walkers, canes, invalid potty chair and other senior items were delivered to the residents of a very nice and clean senior care home in Tela. The home was built by Sherwood’s’ Lions Club. It is a wonderful facility.

Medical supplies – these were distributed to several rural clinics with the bulk going to the Tela hospital. We wish the medical team had been there to help distribute the material. Unfortunately, they had to leave before the container arrived.

Dental supplies and portable dental chairs – these were given to (dentist) Jackie Bonilla (Sherwood’s daughter) to store for the 2008 dental team. There is a sliding scale clinic that she is helping develop that may be a good option for the dentists to work in next year.

Computers – the 59 computers were delivered to the following: eight to the police departments; three to the health clinic; three to the P.T. Center; one to IHNFA; one to the bomberos (fire department); the remaining 43 to the Mayor for his virtual library for the city of Tela.

Police equipment – the bicycle, holsters, belts, handcuffs and other equipment was given to the police department.