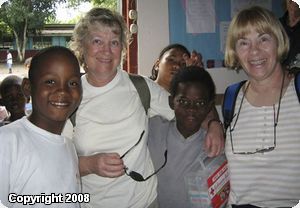 SHELBURNE – It was while packing to go to Honduras a year ago that Nicole Gilbert-O’Brien discovered her ski bag could serve a new purpose. She needed to carry long pieces of aluminum that would become parallel bars at a rehab therapy clinic. Little did it matter to her that she was taking a ski bag to a country on the coast of the Caribbean; the sack was just perfect.

This year, the same creative and flexible attitude will be required from Gilbert-O’Brien and 69 other Vermonters who will travel to the Central American country this month and next with the Hands to Honduras 2008 program. They will build and paint schoolrooms, install playgrounds, staff medical clinics and engage in other development projects. On the way, they will open up their minds and hearts to the lives of those who live in one of the poorest countries of the Western Hemisphere.

Gilbert-O’Brien, a 37-year-old physical therapist from Hinesburg, described her experience in Honduras as “wonderful and tremendously rewarding.”

“I’ve learned a lot from the people there. They are warm, happy and optimistic. You just want to be there and help,” she said. In a few weeks she departs on her third trip to Honduras.

The Vermont-Hands to Honduras-Tela program, or H2H, is in its fourth year of operation and is supported by the Rotary Club of Charlotte-Shelburne. The program conducts educational and sanitation projects in Tela, a medium-size municipality on the northeastern Atlantic coast of Honduras.

Seven people make this program their full-time passion by working year-round to raise funds, survey the needs of local Hondurans, coordinate the projects and recruit volunteers. Among them are Gilbert-O’Brien’s mother, Linda Gilbert of Charlotte, and Collen Haag, Shelburne’s town clerk and treasurer.

“We have no problem,” Haag said regarding finding so many individuals who pay for their travel expenses and donate a week or two to do labor in a needy area. People hear about it, and they signup, the women said.

“You come back with a deep appreciation of what you have here. It is an enriching, nurturing experience for your soul,” Haag said.
Enrich yourself,
help others

H2H volunteers will leave in two groups the last week of January and the first week of February. Upon arrival, volunteers are driven around to become familiar with the projects. They choose the projects on which they will work.

Gilbert-O’Brien will see patients and provide training at the rehab therapy clinic H2H volunteers built in 2006. When she first traveled to Tela, the clinic had recently opened. The patients were mostly children who suffered brain injuries at a young age and were unable to sit up or walk.

“The children were being carried in by parents,” she recalled.

During the 2007 trip, the H2H physical therapy team saw about 60 patients in a week, trained the two people who now run the clinic, and equipped the clinic with the parallel bars, Gilbert-O’Brien said. Some of these children were able to sit up and stand up on their own for the first time, she said.

“The clinic is really progressing and becoming a part of the community. We are making it sustainable for them,” Gilbert-O’Brien said.

This year, H2H medical volunteers grew to include five physical therapists, a child psychiatrist, a nurse practitioner, and two pediatricians among other medical professionals. Traveling with them will be a police officer, a special educator, a welder, administrators, builders, students — “people from all walks of life,” Gilbert said. Volunteers — from age 8 to 77 — come from around Vermont including Addison, Barre, Bristol, Burlington, Charlotte, Essex, Essex Junction, Hinesburg, Lincoln, Montpelier, Shelburne, Underhill and Williston.

Louisa Schibli of Charlotte will travel to Tela for the second time with her 10-year-old son, Scott. She joined the group after receiving a letter from H2H asking for donations. “I do not want to donate, I want to go,” she recalled saying when reading the letter.

Schibli and Scott helped repaint a school and build a playground. Scott sweated dragging cement bags and carrying buckets and never complained, she said. “He knew it was for something better.”

The trip showed Scott the reality of a Third World country and allowed him to interact with people of all ages, Schibli, 41, said. “It turned out to be the most amazing trip. He just blossomed,” she said.

This year, mother and son collected soccer uniforms and balls to take with them and help implement a soccer program for the children of Tela.

Other projects in the 2008 program include conducting fire and police training, building benches and latrines and making general repairs in schools and day-care centers, landscaping, painting murals, and running women’s health and pediatric clinics.

“The need is so immense,” Gilbert said. “The little things we do make a huge success for them.”