Linda Gilbert an “Angel” from Charlotte to Honduras 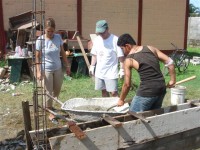 In January when temperatures plummet, the sun is low in the sky, and people don layers to stay warm, Linda Gilbert will head to a warmer climate. The Charlotte resident isn’t a snowbird; she is preparing to return to an impoverished Central American country to help residents.

Linda, a Charlotte resident for 17 years and a former marketing director, will travel to Honduras as part of VT-Hands to Honduras-Tela to build community-wide projects that will help residents. The group provides educational, instructional, cultural and humanitarian assistance to the region. The small, Central American nation is the second-most impoverished nation in the Western Hemisphere, falling behind Haiti, Linda said.

In 1998 Hurricane Mitch devastated the small nation, causing widespread damage estimated at $3 billion dollars. At the time, 70 percent of the country’s crops were destroyed, and 70 to 80 percent of the Honduran infrastructure was also decimated. Average wages remain low and the distribution of wealth polarized.

The “heart and soul” of the group’s mission is twofold: help improve living conditions so residents can become independent and break the cycle of poverty. On tap for the group are projects ranging from building a classroom, installing a new clean-water supply system for a school and constructing women’s health and pediatric clinics. “I heard about the program through the Charlotte-Shelburne Rotary,” explains Linda. “I’ve done community service in the past and I also traveled, so this trip met my needs.”

In May Linda traveled to the country to deliver an ambulance donated by St. Michael’s College in Colchester. Last year volunteers from the group worked on a myriad of projects, from constructing a concrete-block classroom to installing a water system for a school with 800 students to donating materials for build a roof to cover three classrooms.

This will be Linda’s fifth trip to Honduras. She leaves January 17, and plans to spend about one month there. Linda will be joined by 72 Vermonters from around Chittenden County and ten others from around the United States.

For her efforts, Linda was profiled in a recent edition of Yankee Magazine as an “Angel Among Us.” She is modest about her work, praising fellow workers for the program’s success. “It’s all about the volunteers. It’s really expanded. We have a lot of people who bring their children. It really makes a huge impact to see children reach out and do community service.”

Linda spoke about what the team of volunteers will be undertaking in Tela. One project centers on constructing a school kitchen. Because there is no way to cook, children who are students at the school have no way to eat hot food, and mothers carry food to them. After the construction is completed, pupils will have hot meals without parents needing to supply them.

Linda also noted that volunteers will reach out to poor, single mothers at a daycare to teach them sewing skills.

Linda sits on the administrative committee of the VT-Hands to Honduras-Tela group. The organization is largely dependent on fundraising, and members busily write grant applications, seeking donations. The Charlotte-Shelburne Rotary is sponsoring the trip to Tela next year, but participants must pay for their own round-trip tickets. Linda said the group seeks to raise another $40,000 for the organization’s needs.

Charlotte residents Linda and Al Gilbert and Dorrice and John Hammer are members of the organization committee of VT-Hands to Honduras-Tela as are Colleen Haag and Sam Feitelberg of Shelburne and Norm Robinson of Essex Junction.