Baby Joggers Go a Long Way to Make a Difference 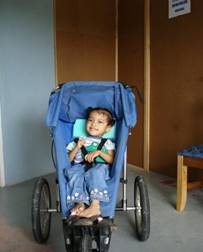 SHELBURNE — Sybil Chicoine never imagined a piece of equipment forgotten in her garage could help someone thousands of miles away.

At the request of her 6-year-old daughter, Chicoine dusted off the baby jogger she retired three years ago and donated it to a group of Vermont physical therapists. At the end of this year, the souped-up stroller will journey from Shelburne to Honduras where, once again, it will be of help to a family.

The Vermont – Hands to Honduras – Tela project, which is operated in part by the Charlotte-Shelburne Rotary Club, completed construction of a physical therapy rehabilitation center in Tela , Honduras , in October. Now that medical treatment is available, Vermont-based volunteers have tackled another problem — helping more than 80 patients travel to the center for treatment.

In a country where few own vehicles and there is little public transportation, it has proved difficult for some families to transport their disabled children over rocky, mountainous roads. That’s where the baby joggers come in.

“A baby jogger has three big wheels and a wide base. They’re made for jogging, so they have cushioning,” said Nicole Gilbert-O’Brien, a physical therapist from Hinesburg. “Their big wheels make it easy to maneuver on dirt roads, and they support children quite well. They’re also collapsible so you can fit them under the seat of a bus.”

In the United States , the strollers are traditionally used by parents who want to push their young children as they exercise. In Honduras , the physical therapists have found that even older, heavier children can be pushed in baby joggers, which are much larger than traditional, small-wheeled strollers.

“The rural roads — there’s just pathways like you’d find in the country,” said physical therapist Sam Feitelberg of Shelburne. “They’re rugged, and a jogger allows a family to move a child.”

Many of the children who receive treatment at the physical therapy center suffer from cerebral palsy, a neurological disorder that permanently affects body movement and muscle coordination. The disorder is common in countries like Honduras , where medical care isn’t as readily available to pregnant women and newborn children.

Without the joggers, family members have been forced to carry children miles over dirt roads several times a week so they can receive physical therapy. A lack of transportation also keeps the children from being able to participate in community activities outside the home. Some families who have received baby joggers from Hands to Honduras are able to take their children to church and other cultural events, Gilbert-O’Brien said.

Chicoine, who also donated her used baby backpack to Hands to Honduras , said she’s happy to know that something she took for granted can help someone else.

“I think it’s awesome,” she said. “If I can give them a jogger-stroller, then I’m happy I can at least do that.”

Vermont Hands to Honduras – Tela is also collecting baby backpacks and physical therapy supplies such as crutches, walkers and wheelchairs — equipment that can be expensive and rare in Honduras .

“In the U.S. , special-needs children get almost anything they need through insurance or services. There, that’s not the case,” said Kim Kelley, a physical therapist from Middlebury.